Men may have to move aside from high-profile roles in business and government to make way for women to move in, according to the chairman of Transfield, Diane Smith-Gander.

A bill proposed by a group of Senate crossbenchers would make it compulsory for federal government boards to be at least 40 per cent female.

Ms Smith-Gander, who is also president of the Chief Executive Women group, said to reach that target, and an eventual bigger target of 50-50 representation of women on business boards and in senior roles, capable men would have to make way for capable women.

“When it comes to senior jobs and political appointments I think 50-50 representation is where we’re heading,” she said at an Australian Institute of Company Directors lunch in Melbourne on Tuesday.

The Prime Minister’s business advisory council had only two women and 10 men.

“If we’re going to get six and six it  means that four of those 10 men who are inevitably qualified and well-intentioned are going to lose their gig,” she said.

“They are not going to want to lose their gig and that’s a sad and sorry thing, but that’s just the way it is. This is the problem we’re actually dealing with. Some men are going to have to give up their hard won roles to allow equality.” Does the “fat acceptance” movement “destabilize the heteronormative gaze”? Can women overcome “gender inequality” by a “radical rejection of beauty as feminine aspiration”? Those possibilities are suggested by two Canadian sociologists in an article, included in a leading Women’s Studies textbook, that compared Dove’s “Real Beauty” advertising campaign to a protest by lesbian activists in Toronto.

Feminist Frontiers is a Women’s Studies textbook described by its publisher, McGraw-Hill, as the “most widely used anthology of feminist writings.,” Now in its ninth edition, Feminist Frontiers is edited by three lesbians: Professor Verta Taylor and Professor Leila Rupp, on the faculty of the University of California-Santa Barbara (where they are known as“the professors of lesbian love”), and Smith College Professor Nancy Whittier (whose wife Kate Weigand is the author of Red Feminism: American Communism and the Making of Women’s Liberation). 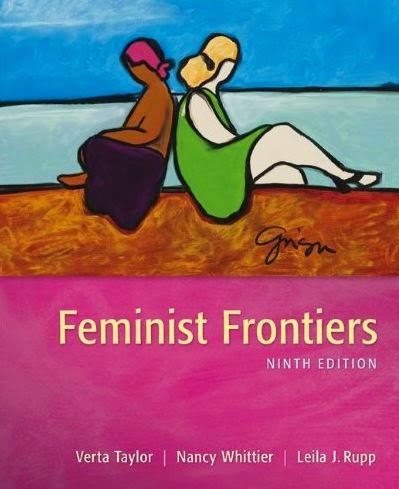 Because this textbook is so influential in academia, I obtained a copy ofFeminist Frontiers via Amazon.com for my research in the “Sex Trouble” series on radical feminism. As I explain in the introduction to the first edition of Sex Trouble:

Those who would attempt to separate “mainstream” feminism from the more radical aspects of its ideology cannot avoid the problem that the faculty and curricula of university Women’s Studies programs — where feminism wields the authority of an official philosophy — are disproportionately dominated by radical lesbians. This hegemonic influence is not merely manifested in the fact that outspoken lesbian activists are employed as directors and professors in Women’s Studies programs everywhere, but also plainly evident in the textbooks and readings assigned in their classrooms.

It should be noted that, according to federal research, 2.3% of the U.S. population (about 1-in-40 American adults) is either gay or bisexual. Yet lesbianism is vastly overrepresented in the faculty and curricula of Women’s Studies programs to such an extent that Carmen Rios, communications director of the Feminist Majority Foundation, jocularly described these departments as “Lesbo Recruitment 101.” This anti-heterosexual bias is reflected in the contents of Feminist Frontiers, which includes selections with titles like “Hetero-Romantic Love and Heterosexiness in Children’s G-Rated Films” (p. 153), “Doing Gender, Doing Heteronormativity: ‘Gender Normals,’ Transgender People, and the Social Maintenance of Heterosexuality” (p.  309) and “Punks, Bulldaggers, and Welfare Queens: The Radical Potential of Queer Politics?” (p. 536). Among the lesbian feminist authors cited as references by the contributors are Mary Daly, Sheila Jeffreys, Andrea Dworkin, Celia Kitzinger, Adrienne Rich, Judith Butler, Luce Irigaray, Marilyn Frye, Gayle Rubin, Audre Lorde and Arlene Stein.

The anti-heterosexual bias of Feminist Frontiers is also apparent in “Feminist Consumerism and Fat Activists: A Comparative Study of Grassroots Activism and the Dove Real Beauty Campaign,” by University of Toronto professors Josée Johnston and Judith Taylor (p. 115). This article, first presented at a 2006 meeting of the American Sociological Association and later published in the feminist journal Signs, invokes the theories of Italian Marxist Antonio Gramsci as the basis of its analysis:

Building on neo-Gramscian theories of hegemony, we argue that ideologies express degrees of hegemony depending on their ability to reinforce and naturalize power hierarchies and material inequality.

Feminists have frequently used Marxist theory to analyze the “male supremacy” they depict as an “ideology” that oppresses women in capitalist societies. In their article, Johnston and Taylor compare the “transformative possibilities” of Dove’s “Real Beauty” campaign to a protest movement by the Toronto lesbian group Pretty, Porky and Pissed Off (PPPO). Co-founded by in 1996 by Allyson Mitchell (who is now an assistant professor in the School of Gender, Sexuality and Women’s Studies at Toronto’s York University), PPPO staged protests promoting the message that “being fat can mean being healthy, sexy and socially productive” and counteracting “fat phobia,” as a 2004 article described the group. According to Johnston and Taylor, PPO’s objectives were to “challenge hegemonic beauty standards” and “challenge misogynist attitudes about fat women and sexuality,” in protests that offered “a counter-hegemonic critique of beauty and its relationship to capitalist consumerism” (pp. 116-117). They compare these protests to Dove’s “Real Beauty” campaign:

Billboard, television, and magazine ads depicted women who were wrinkled, freckled, pregnant, had stretch marks, or might be seen as fat (at least compared with the average media representation of women). . . . The campaign . . .is now a major feature of Dove’s global marketing. (p. 116)

Because the “Real Beauty” ad campaign “promotes itself as a progressive force for women,” Johnston and Taylor interpret Dove’s marketing as “feminist consumerism,” a phenomenon with “the potential to partially disrupt gender norms” (p. 116). Johnston and Taylor contrast this to the “grassroots models for social change . . . at the heart of feminist consciousness-raising,” as exemplified by the PPPO protests:

The idea arose from a 1996 conversation between Allyson Mitchell and Ruby Rowan, both of whom were artists and women’s studies students. While attending a conference on subcultures, they lamented the absence of attention to lesbian feminists active in the queer arts scene. . . . The conversation turned to mundane matters; not being able to find cool pants that fit. . . .
Characterizing participants as a “dyke network” of artists, performers, feminists, friends, and exes, Mitchell says the event solidified their identities as fat activists . . . (pp. 118-119)
In addition, PPPO’s radical disruption of hegemonic beauty ideology worked to destabilize the heteronormative gaze. Strongly linked to a lesbian arts community, PPPO activists did not prioritize the approval of men socially or performatively, and this may have allowed a more radical rejection of beauty as feminine aspiration. (p. 123)

Comparing these protests to the “corporate strategy” behind “Dove’s appropriation of feminist themes,” Johnston and Taylor write that Pretty, Porky and Pissed Off “waged war with hegemonic beauty standards — actions far removed from Dove’s reformist peacemaking” (p. 123). Although the Dove campaign “partially disrupts the narrowness of Western contemporary beauty codes,” Johnston and Taylor conclude, “at the same time it systematically reproduces and legitimizes the hegemony of beauty ideology in women’s personal lives” (p. 125).

Hostility to “beauty ideology” has been a core theme of feminism since the emergence of the Women’s Liberation movement in the 1960s. Its first major  protest occurred in September 1968, when about 100 feminists staged a demonstration at the Miss American pageant, condemning how the contestants “epitomize the roles we are all forced to play as women.” The protesters claimed “women in our society [are] forced daily to compete for male approval, enslaved by ludicrous ‘beauty’ standards we ourselves are conditioned to take seriously.”

Lesbianism also emerged early as a core theme of the Women’s Liberation movement. In 1971, prominent feminist Charlotte Bunch was co-founder of a D.C.-based lesbian collective known as The Furies. In  the collective’s first publication (January 1972), Ginny Berson declared:

We are angry because we are oppressed by male supremacy. We have been f–ked over all our lives by a system which is based on the domination of men over women. . . .
Lesbianism is not a matter of sexual preference, but rather one of political choice which every woman must make if she is to become woman-identified and thereby end male supremacy.

So-called “fat-positive feminism” is a movement that “addresses how misogyny and sexism intersect with sizism and anti-fat bias.” While feminists blame “anti-fat bias” on male supremacy, the health risks of obesity are serious, according to the Centers for Disease Control and Prevention (CDC): “Obesity is a national epidemic and a major contributor to some of the leading causes of death in the U.S., including heart disease, stroke, diabetes and some types of cancer.”

Obesity is such a serious problem among lesbians that the National Institutes for Health funded a $3 million study to determine why “nearly three-quarters of lesbians are overweight or obese.”

When that study made headlines in September 2014, Mari Brighe wrote at the lesbian blog Autostraddle that lesbians “tend to be less critical of their bodies than straight women,” because they don’t “suffer the incessant, unreasonable pressure of the male gaze.”

This would suggest that “the male gaze” is actually beneficial to heterosexual women, whose “feminine aspiration” to be attractive to men by meeting “hegemonic beauty standards” (as the Johnston/Taylor article put it) leads women to stay thin and thereby avoid heart disease, diabetes and other health complications of obesity. But the way women benefit from heterosexuality isn’t something college students are likely to learn from Women’s Studies classes, where the textbooks are edited by lesbians who never have anything good to say about men.