“You give advice to men on how to avoid charges of date rape if the woman has second thoughts the day after.” – An SJW who has called me a rape apologist.

SJWs have attacked this article on how to avoid a false rape case on the grounds that it is a guide to rape. That makes no sense, as this article discusses how to handle yourself after consensual sex has occurred.

One such person wrote the above quote. A SJW believes you are guilty of rape “if the woman has second thoughts the day after.”

Date rape is the easiest accusation for a woman to make and the hardest one for a man to defend against, as the Tinder date rape case out of New Zealand shows. (Compare, “Woman gang-raped after meeting man from Tinder” with “Tinder date Kiwi retracts gang rape claim.”)

I have posed this question to several feminist criminal defense lawyers, “What percentage of date rape cases do you think are true?” Most will throw their hands up, as it’s virtually impossible to tell what happened in these sorts of cases, as it’s generally he-said-she-said.

Women often falsely accuse men of rape after talking to an SJW. SJWs are Neo-Puritans who believe that all sex between a man and a woman is rape.

An otherwise nice girl might talk to a few “friends” who then peer pressure her to go to police.

To avoid a false rape accusation, you must protect yourself at all times.

Four Hofstra college students were accused of gang-raping a fellow student. They were thrown into jail, and held without bail. Had they gone to trial, they’d have been convicted.

Yet the men were released from prison, after one of the defendant’s lawyers produced a cell phone video of the encounter, proving it was consensual.

A feminist writer at Slate observed:

Even lawyers need to beware of false rape accusations. A San Francisco lawyer was charged with raping three women, and held effectively without bond. Luckily he had videotaped sexual encounters with two of the women, and most charges were dismissed against him.

Unfortunately, he did not videotape his sexual encounter with the third accuser, and thus still faces trial. UPDATE: All charges were dropped against this wrongfully accused attorney. See, “Charges dropped against lawyer accused of assaulting women who answered ad for rough sex.”

Some will ask about the legality of secretly recording sexual encounters. Cap We Tapeprovides an excellent overview of the legal landscape. One must highlight that the lawyer in California likely illegally recorded his sexual encounters. Breaking the law saved his life.

3. Save your text messages.

Men are often told to be aloof and play it cool. That is true before you have sex. Once you’ve had said, there’s no need to try being Mr. Cool Guy. Don’t be needy, of course, but don’t play too hard to get.

After having sex with a girl for the first time, always send her a text message to let her know how much you enjoyed her company.

By sending a text, you are showing that you’re neither afraid nor ashamed of what happened the night before.

Most girls do not want to falsely accuse you of rape. Usually they talk to a friend about sex. Then an SJW puts bad thoughts into her head. According to SJWs, consensual sex is rape if the girl has second thoughts on the next day.

Hanging out with the girl the next day will prevent SJWs from poisoning her mind against you. Also, it would lead a reasonable person to ask, “Why did the girl go out to breakfast with a man who raped her?”

Some may view my disdain for SJWs are being paranoia. Hardly. I have studied them. Listen to what they say.

5. Have her put on the condom.

This will ensure that her fingerprints are on the condom, which is evidence of consent. Unless you can’t save your condoms in a glass slide, ala Dexter, this is only short-term protection. Even if you’ve thrown the condom away, you can scare the shit out of her by claiming you still have it.

6. If she mentions “buyer’s remorse,” take her out for dinner, and do not see her again.

Imagine a girl calls you, telling you she feels “weird” about what happened. Beware. This girl could have Borderline Personality Disorder, and she may be prepared to falsely accuse you of rape.

Take her out in public. Show her a nice time. Have her smiling. Then go home – alone.

She will likely want to have sex with you again, but you must avoid women who are unstable. Only deal with stable, emotionally-sound women.

7. Never “be nice” if she expresses buyer’s remorse.

If a girl calls you the next day, keep in mind she may be recording the conversation, or the police may be monitoring it.

Most Special Victim’s Unit prosecutors and investigators will use this ploy on you:

Girl calls the next day, telling you that what happened last night was “wrong.” She’ll demand an apology. You apologize. This apology is used as proof you raped her, even if she never directly claims you raped her.

She may instead say she felt “rushed” or “pressured.” These are red flags. Do not apologize. Instead, say,

Well, we’re both adults. It’s sad we live in such a Puritanical society that hates sex. Last night was a great time, though, and I can’t wait to see you again.

NEVER TALK TO THE POLICE.

It’s a dangerous world out there, guys. Be vigilant. Protect yourselves at all time.

Summary: Stoya accused her ex-boyfriend of rape on Twitter while simultaneously promoting James Deen on a website she owns. (That’s not a typo. Read on!)

How do we know James Deen has been falsely accused of rape by Stoya?
Hint: The rape fits the narrative.

A proper rape hoax must fit the narrative. Unethical women understand this.

For a good rape hoax, you need the right defendant – which means a white man. James Deen fits the profile, and it doesn’t hurt that Deen is a confessed racist. In an interview with Haaretz, Deen said he viewed blacks, Hispanics, and non-Jewish whites as being beneath him. (“The Jews know we’re better than everyone else. That’s all that matters.” – James Deen.)

The rape accusation against Deen is false to the point of absurdity.

Stoya made the rape accusation on Twitter, not in a police station. Second, she mentions being a feminist in the Tweet, which is a total red herring. Finally and most damningly: She features her “rapist” on a website she owns!

Rape accusations belong in a police station, and rapists belong in jail. Yet time and again we’ve seen women bring their rape accusations to the public rather than the police. The Rolling Stone Rape Hoax was the most recent example of a publicity-seeker accusing men of rape in the media.

By posting her accusation on Twitter, Stoya has been able to receive considerable press coverage, boosting her profile.

Stoya specifically mentions feminism is her public rape accusation against James Deen. This is proof she seeks to interject ideology into what should be a police matter. She is also sending a bat signal out to SJW hate mobs.

Stoya features James Deen on a website she owns.

In what world does a woman feature her rapist on her website?

UPDATE: Stoya’s most recent scene, which you can purchase on her website, is with James Deen. 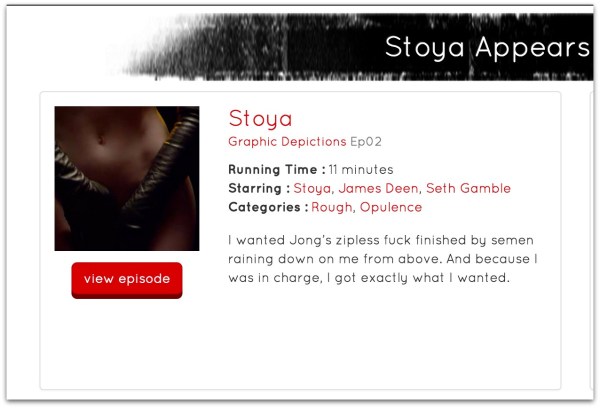 SJWs with rabies and stupid people with poor reading comprehension are going to read a lot into this article. Let’s clear up some points.

It’s also possible for a woman to be raped by her boyfriend.

Stoya’s rape accusation is false because it was made on Twitter in a desperate way to get attention to herself. She is clearly trying to get revenge against an ex-boyfriend.

James Deen, if he’s lucky, will merely face SJW hate mobs and have his image destroyed. If he’s unlucky, this rape accusation ends with him in handcuffs.

Like many men before him, Deen is learning that women will violently attack any man who claims he’s innocent. I have already received death threats for insisting that we apply the presumption of innocence to Deen.

Moreover, false rape accusations harm women. I do not believe Stoya, as her accusation reads like every other rape hoax.

Every high profile rape accusation has turned out to be a hoax.

In the unlikely event Stoya was raped, few will believe her. We’ve been lied to and now view all public rape accusations as false.

What can James Deen do to protect himself?

James Deen is in a bad spot. He’s going to be under attack.

He needs to read

James Deen also needs to read Essays on Embracing Masculinity to keep his fire burning when the whole world is trying to blow it out.

Protect yourselves at all times.

Any woman at any moment can falsely accuse you of rape.

P.S. To control your thoughts and emotions during times of stress, read Gorilla Mindset.