If you want to abuse women, become a liberal. You can attack and rape women while receiving a vigorous defense from college professors, fellow college students, and the mainstream media. Clifford Durand’s high profile threat against a female college student is the latest example of the left’s hatred of women.

Clifford Durand, a #BlackLivesMatter activist and student at St. John’s University, was triggered when he looked over to see an attractive female classmate with a Donald Trump bumper sticker on her laptop. Rather than debate this woman, he threatened to smash her.

Clifford is a good boy who didn’t do nothing!

Clifford Durand later choked his female classmate. His friends claimed she threw a latte from Starbucks on him, although footage of Clifford showed him looking clean and fresh.

Anons originally discovered the violent tweets, and I broke the story worldwide. My notifications are filled with attacks on me, the woman, and of course defenses of Clifford.

“He didn’t say he’d smash the woman,” they say, “He said he’d smash her computer.”

How much more insight do you need into #BlackLivesMatter? Chill out, guys, he was only going to destroy his classmate’s college laptop. What’s the big deal?!

Of course as anyone who has a laptop knows, you don’t leave it out unattended. The only way to smash someone’s laptop is to forcibly grab it from the person, or to threaten to hurt the person unless they give it up.

Clifford later choked the young woman, proving that he had violence in his heart when he posted the Tweet.

None of this matters to the left, of course, as they hate women.

Clifford Durand’s feral violence is not isolated, as it’s common on college campuses.

Newman didn’t even deny making rape threats. As a member of the left, he knows violence against women is acceptable. 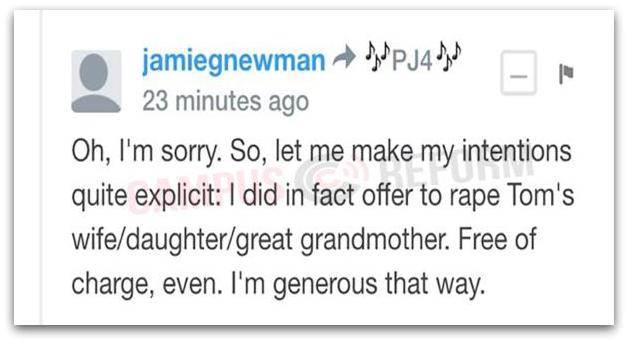 If I had threatened to smash a woman or rape someone, it’d be a scandal.

But the left gives a free pass to its members.

One has to wonder if rape culture is real – among the left.

If you work around liberal men, maybe there is a culture of rape and violence against women.

Clifford Durand hasn’t been punished. Jamie Newman is free to walk the campus.

If you want to rape a woman, become a liberal. Your friends on the left will give you a pass.

If you want to live like a man and understand women while having a better life, read Danger & Play: Essays on Masculinity.