Whykiky – Don’t Give It Up (Eurodance)

when she was a child, her older brother, like half-Asian men who are rejected by both sides and treated poorly by white men and Asian women, killed himself. In contrast, the actor who played Draxx, Dave Batista, has a Phillipino father and a White mother.

Pom Klementieff was born in Quebec City, Quebec, Canada, to a Korean mother and French-Russian father, who was working there as a consul with the French government.[3][4] Her parents chose the name “Pom” because it is similar in pronunciation to the Korean words for both “spring” (봄) and “tiger” (범).[4] Klementieff lived in Canada for one year before her family traveled extensively due to her father’s job.[5] They lived in Japan and the Ivory Coast, before settling in France. Klementieff later said that travelling at an early age gave her a “gypsy soul”.[4][5]

Klementieff’s father died of cancer when she was 5, and her mother had schizophrenia and was unable to care for children,[4] so Klementieff was raised by her paternal uncle and aunt.[3] Her uncle, whom she described as “like [her] second father”, died on her 18th birthday.[4] Klementieff briefly attended law school after her uncle’s death to appease her aunt but did not find the career path appealing. She also worked as a waitress and saleswoman in France.[4] She started acting at age 19 at the Cours Florent drama school in Paris. A few months into her education, she won a theater competition that awarded her free classes for two years with the school’s top teachers.[5]

Drax the destroyer is played by Dave Batista, a half-Asian with an Asian father and White mother.

Strangely enough, he spends much of Guardians of the Galaxy 2 insulting Mantis’ character for being unattractive, and stupid.

Tofik Dibi wants to kill non-Muslims who sit on a terrace in the sun during the next month. That is the gist of his post on Twitter.

Here is his tweet, which in English is “Me during Ramadan if you have a drink on a terrace”: 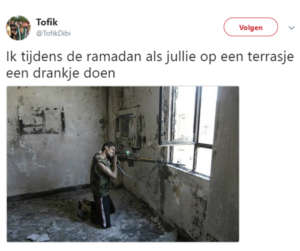